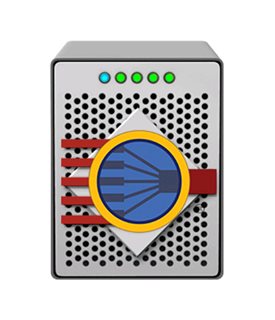 RAID 0 (Stripe)
Data is split into blocks over two or more drives at same time. The ideal RAID for a scratch disk volume for video production/editing.
RAID 1 (Mirror)
The same data is written to two drives for highest level of data safety and redundancy.
RAID 4 (Stripe with Dedicated Parity)
With RAID 4, data is striped for speed like a RAID 0, but one of your disks is used as a dedicated parity disk. The parity disk is used to reguild your data if a disk fails. This results in performance nearly as fast as RAID 0, but with the added benefit of protection against disk failure. RAID 4 should be used instead of RAID 5 if you are using SSDs for your volume.
RAID 5 (Stripe with Distributed Parity)
Data is Striped (Similar to RAID 0), but unlike RAID 0, each disk also contains parity data, which is used to rebuild your data should a disk fail. RAID 5 has the best combination of speed, safety and disk capacity. The ThunderBay 4 RAID solutions come with pre-tested drives and are configured as RAID 5.
RAID 10 (1+0)
RAID 1+0 volumes combine the speed of strips (RAID 0) with the protection provided by mirrors (RAID1). It offers the best combination of speed and safety.

Five RAID Levels for All Uses
Choose between five RAID levels to suit all kinds of disk usage: RAID 0, 1, 4, 5 and 1+0. Keep your data super safe, access it lighting fast, or choose a combination of speed and safety.
Safeguard Your Data with SoftRAID RAID Volumes1
Standard Hardware RAID products only protect you from losing files when disks fail. SoftRAID does more by constantly checking your disks and warning you in advance — before a disk fails — giving you time to replace bad disks, saving precious files and data.

Not only do you gain peace of mind knowing that you'll be alerted about disk problems, SoftRAID will allow you to carry on with work even if a drive fails.

At any time you can verify your disks to make sure all sectors are readable. SoftRAID's Validate Volumes checks readability and parity and Certify Disk makes sure a disk is readable before you put your work on it (Note: Certifying your disk will destroy any data put on it).
Now Including SMART over USB
SoftRAID tests your SATA disks for SMART failure, and it can use SMART data to predict disk failure for USB and FireWire disks.
SoftRAID Monitor with Notifications
The SoftRAID Monitor is always running even when you're not logged in to your Mac. It watches your disks and volumes for errors and will warn you as soon as a problem occurs. It can even even send you an email.